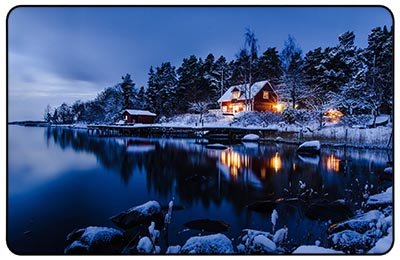 Sweden is not only the country of ABBA, IKEA and H&M
It is a country that offers plenty to those who decide to change their life and go and live abroad. The Swedish are attached to their traditions even if Sweden is one of the most advanced countries in the world. Thanks to the welfare state the quality of life is very high.
Here below are 8 reasons to live is Sweden:

1. Even if the national language is Swedish 89% of the population speak English too. Moving to Sweden therefore is not a problem for those who speak English.

2. The Swedish state strongly believes investing in the young generation. For every child born a monthly benefit of approx. €100 is given which rises to €160 during High school. University fees are also covered by the Swedish state.

3. The quality of the air is far better than Central and Southern Europe. According to the Air Quality index (see chapter Air Quality Index found in the eBook Paradise Found at Last). The air quality in the south of the country is very good whereas in the north it is excellent.

4. Regarding natural calamities Sweden is very safe. The risk of earthquakes is very low and there are no volcanoes whatsoever.

5. When you live in such a liveable country you most probably would not move elsewhere. The Swedish love their country also because the State is able to provide for their needs. The emigration percentage is 3.2%, amongst the lowest in Europe.

6. Prostitution is a global plague. The Swedish have understood the problem and they are tackling it through a legislation called ‘The Swedish Model’ (implemented also in Norway and Northern Ireland). A prostitute is considered a victim therefore not culpable or punishable by the Swedish law, but the client is. When the demand falls, the offer falls too.

7. In Sweden the life is expectancy is 82 years of age. This is due to the fact that all citizens have the same rights. The National Health Service functions very well and serves all citizens indistinctly.

8. The Swedish State assures that all citizens have full rights and a high level of freedom politically (political transparency and democracy), freedom of press (number 1 globally) and leader in woman’s rights.

Of course Sweden is not perfect. We made the choice however to give you 8 good reasons why Sweden is a country to move to.

An island reveals its future
Scroll to top