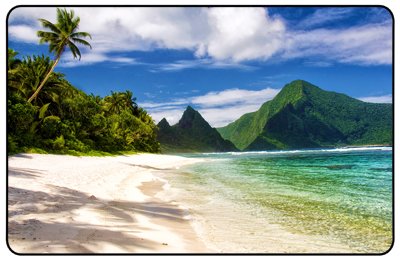 Ta’u, one of the most enchanting Polynesian islands, has something unique. This Pacific Island was no different from all the other islands in the world, but not now.

You have to be aware that in nearly all the islands of the world being energetically self-sufficient is only a mirage. Being physically away from continents the islands energetic resources are practically non-existent depriving the local population.

It is a fact that practically all the islands in the world totally depend on other States for energy and this is not good for the present and future stability of a country. Italy, for example, despite being a peninsula and not an island, imports from other countries 80% of its energy (electricity, petrol, diesel fuel, gas…).

Well, until recently, Ta’u (that is part of American Samoa) had to buy tens of thousands of litres of diesel fuel every year from other countries to fuel the generators and produce the necessary electricity for nearly 900 of its inhabitants.

Many of you know Elon Musk, the polyhedral inventor and founder of the digital payment Paypal company, the automobile company Tesla Motors and the aerospace company Space X. What does Elon Musk have to do with the island of Ta’u? Well his company, SolarCity, constructed the immense solar plant made up of five thousand panels and sixty powerpack accumulators (Tesla) that allows the whole island of Ta’u to be enegertically self-sufficient day and night.

To be honest the installation is an eyesore. To  build the PV plant a portion of the forest had to be cleared and now the landscape has been damaged. Instead of designing an immense single plant had he mounted small PV’s on the roofs of every house well the effect would have been much more aesthetic. Anyway , from an energetical point of view the result is meritorious. Now Ta’u is one of the very few islands in the world that is energetically self-sufficient .

Is Norway really the happiest country in the world?
Scroll to top